Guillotined By An Elevator Platform 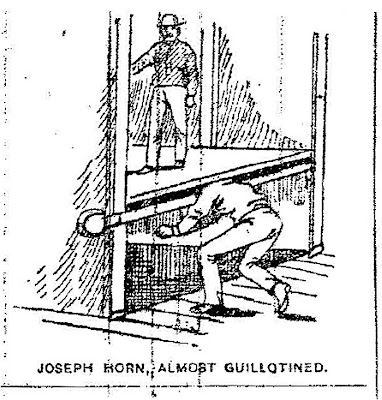 “A horrible accident occurred at Hayden’s bakery, corner of Pearl and Pike Streets, Tuesday afternoon…Joseph Horn, one of the bakers, was on the second floor. For some reason he walked over to the elevator shaft and, carelessly leaning on the safety bar, looked down the well, his head projecting over. While he was in this position the elevator, which had been started by the man above, came noiselessly down. Horn’s head was caught between the platform and the safety bar…The man’s head would have been pulled from the trunk had not the heavy oaken bar broken…When first caught the man’s shrieks of agony were frightful…He was picked up when the bar broke and Dr. Theodore Sittel, whose office is near by, on Pearl Street, was summoned…Besides a deep gash on the side of Horn’s head, a long cut almost circled his neck…But for the prompt appearance of the doctor he would have bled to death from the jagged wound…He is about 30 years of age, and a man of family. Yesterday his condition was still serious.”
--Cincinnati Enquirer, January 21, 1892