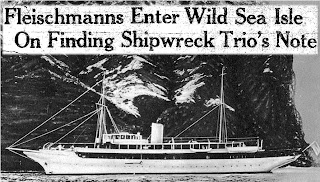 "Cocos is a lovely sight rising precipitously out of the sea and piling itself up into several lofty peaks, the highest of which is twenty-seven hundred feet…It is uninhabited and with the exception of two small sandy beaches I do not know of any place one could possibly land with safety…The vegetation consists of a dense growth of trees and brush which have somehow obtained a foothold on the steep mountainsides. One frequently sees very large trees growing out over the water, hanging hazardously onto the rocks. Waterfalls abound and range from miniature dribbles to tremendous cascades dropping from points several hundred feet in height. They are not wide and from a distance are like silver ribbons decorating the green mountains. There was nothing more refreshing than a shower bath under these falls… 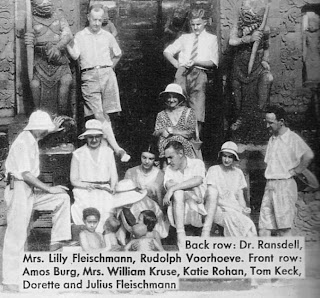 There were numbers of frigate birds, brown boobies and sooty terns on the rocks and flying over the water…The frigates…fly so close to the boat that one could hit them with an oar, but, for the same reason, they in turn can return the compliment with a “bomb” dropped from aloft…We had visited Cocos in January, 1930, and again in March of the same year, but during those visits I do not recall ever having seen a giant ray. On this visit, the waters all along the coast line and around Camargo were fairly teeming with the monsters, averaging, in the sizes which we saw, about two and a half ton. We had to be careful not to hit them with the launches, as we might easily have damaged the rudder or propeller. 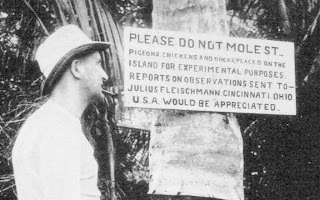 The domestic fowl bought alive at Panama were destined for Cocos. On our earlier trips we had observed no land birds of any kind and wished to put these ashore as an experiment to see if they would naturalize and, if they would, to find out if they could survive among the sea birds…little did I dream that the purchase of those birds would be a direct instrument in the saving of three men’s lives.
During our previous visits to Cocos we had been…to see the place where August Gissling had lived for twenty years while searching for the famous Cocos Island treasure…and it was to the ruins of his corrugated-iron huts that we were now headed to free our birds among coconut and lime groves which he had planted.
As we entered the bay, we noticed that the formerly ruined huts had been set up again and that two flags of the international code were flying on improvised staffs. As we landed on the beach we noticed fairly fresh footprints on the sand…We advanced cautiously, whistling and calling out to anyone who might be in the camp…Attached to a clothes-line strung up inside the hut was a note…It read as follows:
Gentlemen: We (3) of us have gone around on the south side of the island to get cocoanuts as our supply here is very limited…We have been on here since April 15 and our supply of nuts and eats are very poor…We remain 3 hungry men trying to get to the canal zone. Please do not pass us up. We will return here about Nov. 4 or 5.
For a moment we were speechless…Just as we were about to return to Camargo, we remembered the object of our visit…the barnyard fowl…A sign was erected which announced to the world that they were placed on the island for experimental purposes, asked that they be protected and that word as to their progress be sent to me at Cincinnati. 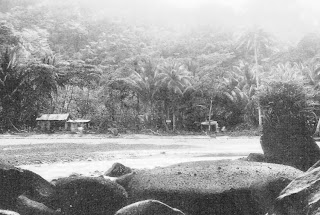 It amused me to think of three starving men returning to their camp, reading the sign, seeing the birds, thumbing their noses at Julius Fleischmann and then sitting down to a delicious dinner…Back on board we fired four shots from our one-pounder and blew our whistle for prolonged periods…But the wind was against us and the rain so heavy that we were fairly sure our signals did not carry far enough to be heard. In the evening we held a council of war and decided to radio Admiral Irwin at Panama, telling him what we had discovered…and asked if he would therefore send us naval assistance to transport them to Panama.

Good news came from Panama next morning, a radio which read:
Am preparing to send assistance. Inform me of any additional evidence found.
(Signed) N.E. Irwin.

As it had been raining ever since we arrived at Cocos our standards of value as regards weather had changed…a nice day meant that it was raining only moderately hard, while to admit that it was raining showed that the water was descending in sheets…To make up in some degree for the bad weather, a radio arrived from Admiral Irwin which read as follows:
U.S.S. Sacramento departed Balboa at midnight Saturday. Will arrive Cocos Island about daylight Tuesday morning. Sacramento is informed as to all you have sent to me.
(Signed) Admiral Irwin. 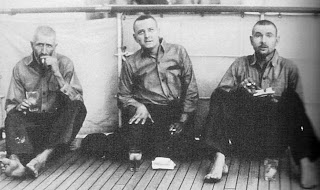 When the Sacramento sailed from Panama, Admiral Irwin estimated that she would come in at daybreak. The storm had delayed her considerably, for she did not arrive until one o’clock. Captain Bowdey came aboard as soon as the ship was anchored and we gave him all the details which we knew…I suggested to him that inasmuch as it was the only calm day we had had, it might be advisable to go around to…see if the castaways were on the shore. If they were…it would be an ideal time to effect their rescue. Camargo and Sacramento pulled up anchors  and proceeded around…As we approached…we all had our glasses trained on shore…Katie, Tom and the doctor simultaneously shouted that they saw what looked like three figures standing on the rocks…the three men…were alive! The Sacramento…lowered a heavy motor launch and a whale boat loaded with sailors, not an easy task due to the heavy roll…The boats would disappear and reappear behind big swells…It did not seem advisable to attempt a landing…the shipwrecked men did not wait…they dived in one by one and swam to the boat…The launch had to go over to the Sacramento to have some dungarees lowered into it, for the men had been picked up stark naked…Soon they were climbing a ladder over our port side…All three had quite recently shaved their heads…their skin was of an odd olive drab, rather than sunburned…the doctor suggested , the very narrow diet range had markedly reduced the iron content of their blood. The two boys seemed strong enough, but…the man of fifty-three, looked twenty years older than his real age…Captain Bowdey radioed over that he would like to get to his anchorage before dark; so we had to rush the men to the waiting launch…However, our first Pacific Island guests did have time to record their signatures in our guest book before we lowered them over the side and bade them goodbye."
Photos: Amos Burg, October 24, 1931 edition The Cincinnati Enquirer