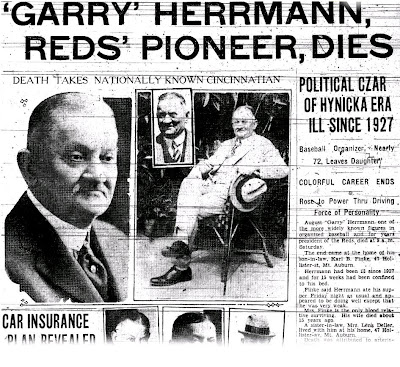 “It was with tears in his eyes that John Owens, 86, Negro, for 46 years the personal messenger and valet of August Herrmann, called at the Herrmann residence Sunday.
Owens will be at the house again Monday night. He will be present also at the funeral services in the Elks’ Temple. Tuesday. He will be among those in the cortege.
In the beginning of Herrmann’s political career he named Owens his messenger--and Owens continued in his service through all the years of Herrmann’s political, fraternal and baseball activity…So highly did Herrmann regard Owens that he took him along an all his important trips…When Herrmann left the office of the Cincinnati Ball Club the task of taking from the wall some of Herrmann’s personal pictures was assigned to Owens and he shed tears as he performed the duty.”
--Cincinnati Times-Star, April 27, 1931