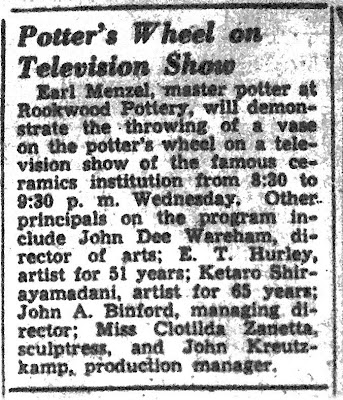 “To celebrate Rookwood’s anniversary in 1947…Sperti, Inc., arranged for a telecast to originate at the Mt. Adams building. The program called for Kataro Shirayamadani to demonstrate the sculpturing of a bas-relief vase before the television camera. As he was climbing the stairway to the second floor for his appearance, the old man lost his balance and fell down fifteen steps, cutting his head so badly that he required hospital care.”
--The Book of Rookwood Pottery, Herbert Peck, 1968

“There were fewer than 100 television receivers in Cincinnati when, in July 1947, W8XCT signed on with a regular program schedule of one hour each week. When 1947 ended, W8XCT was averaging 20 hours [of programming] a week. Early the following year, W8XCT was gone forever [in Feb. 1948 it became WLW-T]”
--Cincinnati Television, Jim Friedman, Arcadia Publishing, 2007 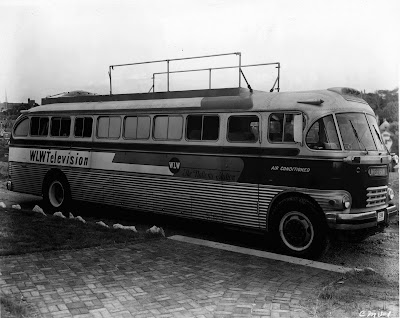 The remote bus used by W8XCT parked at the WLWT transmitter at 2222 Chickasaw Street.

"There was a tense moment last night at the television show at Rookwood Pottery when 93-year-old Ketaro Shirayamadani…fell 15 steps between the first and second floors a few minutes before his scheduled appearance on the show….Witnesses said he was ascending to the second floor when he apparently lost his balance.” 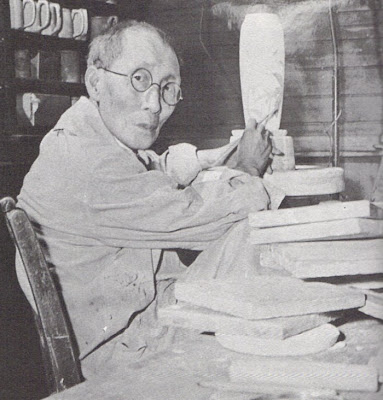 Frail Sherry is described as being 83 in this photo in Herbert Peck's 1968 book.

“Death has brought to a close the noted artistic career of Ketaro Shirayamadani…who was thought to be between 87 and 90 years, died in St. Mary’s Hospital Monday night…John A. Binford, manager of Rookwood…recalled Tuesday that Shirayamadani sustained a scalp wound and bruises in a fall while preparing to take part in a television show at Rookwood last December [sic]…His health began to fail about six months ago. He grew weaker and was taken to St Mary’s Hospital about two weeks ago.”
--Cincinnati Times-Star, Obituary, July 20, 1948

“’He liked to cheat on his age’…Binford recalled that when the wiry Japanese was taken to Christ Hospital for treatment of a scalp cut he suffered last November….[He] hedged on his age, ‘admitting’ he was only 75…’Sherry’ as he was called…worked through July 2, when members of Rookwood’s production line went on vacation for two weeks. He became ill and was taken to the hospital two weeks ago.”
--Cincinnati Enquirer, Obituary, July 21, 1948

NOTE—Hard-working Sherry’s first name is variously spelled in various sources and will likely remain as mysterious as his actual age and the reasons for his self-exile.