Billy at the Smithsonian


"Under the direction of Mr. William E. Hentschel, a class in commercial art and advertising will be a feature of the summer session of the Art Academy of Cincinnati that starts on Monday June 17. In a world where a great premium is placed on publicity, the commercial artist with a thorough background and training will be the artist whose work will be in demand. The national defense program has called countless artists to aid in warning the country of its peril and many more will be called in the future. It would be wise for young commercial artists to be prepared.

To work with Mr. Hentschel is considered one of the most valuable privileges of studying at the Art Academy. Former students at the Art Academy, by the importance of their positions and their success, testify to the excellence of Mr. Hentschel’s instruction. Long experience in all fields of commercial art has enabled Mr. Hentschel to speak and teach with authority, for he has lent his talents to such great and diverse fields as glass, leather, metals, pottery, silk and publishing.

His ceramics are to be seen in the Metropolitan Museum of New York and he has an exhibition of the technique of air brush painting on display at the Smithsonian Institute in Washington, D.C. His attractive air brush prints are to be seen in many cities from coast to coast where they have enjoyed a wide vogue.
Mr. Hentschel’s earliest training was at the famous Art Students’ League of New York. He continued his preparation for his profession here in Cincinnati at the Art Academy where he now teaches. Associated as designer with the Rookwood Pottery for many years, he is at present one of the driving forces in the new Kenton Hills pottery across the river in Kentucky.
The commercial art and advertising class which Mr. Hentschel teaches meets each Monday, Wednesday and Friday afternoon from 1 until 4 o’clock, June 16 through Aug. 9. Other classes that will be given during the summer session at the Art Academy include “Drawing and Painting” with Mr. Myer Abel and “Landscape Painting” led by Mr. Reginald L. Grooms. For further information call CHerry 8792."


"I checked with staff with responsibility over the graphic arts collections in the Culture and the Arts Division, American History Museum. They stated:
"Yes, we have several air-brushed stencil prints by Hentschel. There is a series of proofs and stencils, as shown in the 1977 Pochoir exhibition. We have two other Hentschel stencil prints, a larger fish subject dated 1939, and a bird and flower subject received in 1983.
Aquatones are a different process, a form of screened collotype. One of the firms using the patent license was Edward Stern & Co. of Philadelphia. 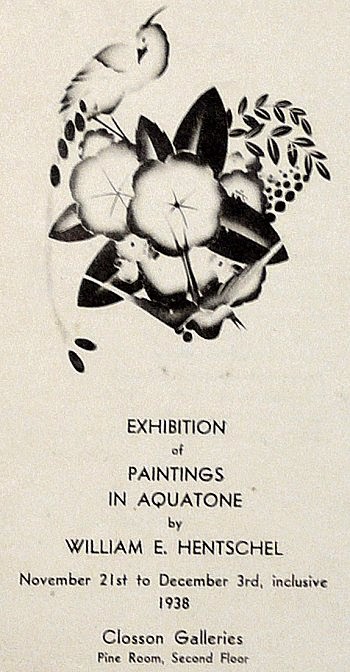 I don't believe Hentschel is connected with the Aquatone process, but obviously someone used the term in relation to his work, as you cited in the original message.
None of our Hentschel prints have been imaged."
Images of the Rookwood Pottery may be found on our Collections Search page. Search on Hentschel and it will pull up an image of the bowl (accession # 1966-3-20) and vase (accession # 1966-3-18)."
Eric Grace, Office of Visitor Services, Smithsonian (info@si.edu), July 23, 2013

"Pochoir [\(ˈ)pōsh¦wär\] means stenciling. It is a French name used for a very special application of the ancient stencil process, introduced in France in the late 1800s and developed to a peak—in France and elsewhere—in the years before the Great Depression. The number of pochoir workshops has dwindled ever since…In the United States pochoir has never had the same success as in France…William E. Hentschel, whose pochoir Green Fish is shown in Part 6 of the exhibition, was something of an exception. Hentschel (1892-1962) was an illustrator, commercial artist and instructor at the Cincinnati Art Academy where he spent most of his active life. His work in commercial design introduced him to the airbrush, a rather new invention, and also to stencil printing. He became a master of both and used them with great skill in his decorative designs, such as Green Fish, as well as in purely commercial applications."