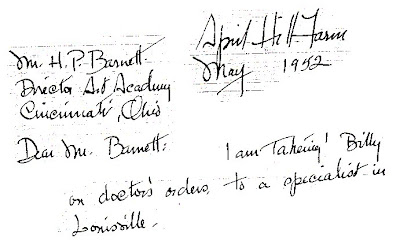 Shortly after the installation of the Western & Southern mural, Billy falls ill and Alza writes the CAA.

“What ever are you up to now, Billy Hentschel?
That’s what some of his friends might ask the widely known Cincinnati artist if they walked into his studio-workshop at his country home in Boone County, near Burlington, Ky.
For Mr. Hentschel, who is properly William E., might be pushing a little roller around on his drawing board, eyeling the edge of a huge stencil, or deep in thought over a partly finished work.
But Mr. Hentschel knows well what he is up to. He is “brayer” painting these days and he finds it fascinating, he said yesterday.
He started his new technique three years ago and has been experimenting and perfecting his idea ever since.
Now, he has 15 of his brayer (roller) works ready for a one-man showing October 29-November 10 at the Closson Galleries, 421 Race St. 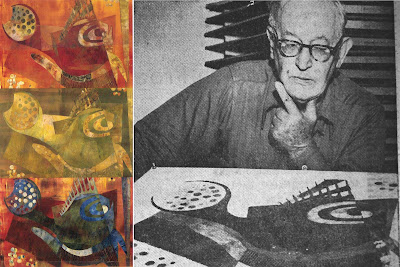 An aging Billy, the stencil and 3 finished 'paintings'.

The idea for his new type of painting stemmed from the current designs of modern homes, he said.
He thought of all the young people moving into the present-day streamlined houses and realized, he said, that they should have the kind of art to go with those new homes.
Then came another thought one day as he was watching some fellow-artists doing some difficult work on woodblock.
How much easier it would be to apply the paint with a roller, the brayer type used by printers to ink type!
So Mr. Hentschel got some rollers in various sizes and set about making some stencils to try his talent and hand in another new field.
He cuts as many as 10 stencils in a series for one painting. Each stencil goes down in its turn on the fine artist paper on his drawing board to add its big or little part to the finished product. Some in the series may permit only a few little dots or a couple of lines.
This method of application, Mr. Hentschel said, makes for a clear, clean-cut job with delightfully jewel-toned overlays that have the very essence of modern life.
Although Mr. Hentschel can use the same set of stencils to make many copies of the same painting, no two ever are quite alike, he said.
That is because he may vary the depth of color the next time in one of the overlays or apply one a little sooner or later than previously, resulting in a change of tone and an individuality to that particular picture.
Oils are Mr. Hentschel’s medium for his breyer paintings with his gelatin rollers, which wouldn’t hold up against water, he said. Rubber rollers would have to be used for water colors, he explained.
A new field of art is really “old shoe” for Mr. Hentschel. He ventured into air brush work way back in 1928 and his stencils and series of aquatones in that technique have had a place in the Smithsonian Institution in Washington since 1935.
His drawings and paintings, in both oils and water colors, have traveled afar to Oxford, London, Paris and even to Australia for a show at Melbourne.
He has exhibited in virtually all the major museums in this country, including Carnegie Institute, Whitney Museum in New York and the Metropolitan Museum of Art and he has been represented in national circulating shows and in the Western Hemisphere Show of Ceramics.
At home, he is particularly outstanding for his excellent murals in the Carew Tower Arcade, Rookwood Room of the Cincinnati Union Terminal, Bell Telephone Co. building and Western & Southern Life Insurance Building. His initials mark many choice pieces of Rookwood, for he formerly was associated with the pottery for many years and has at least 4000 works there to his credit.
Mr. Hentschel is also a well-known figure and name to hundreds of students of art, for he has taught at the Cincinnati Art Academy since 1921. 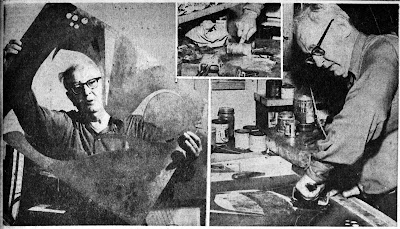 Not the least the Bohemian artist type in appearance, Mr. Hentschel looks more like an easy-going business man or professor.
“I’ve never gone in for smocks” Mr. Hentschel said, “I just wear regular clothes like most other folks.”
He is always eager to take a good look at his latest product away from his studio. So he hangs his new brayer paintings in the living room at his farm home as soon as they are finished. Then he decides if they really are finished.
They provide a bit of an assortment there with the antique furniture which his wife, Alza, also an artist and former teacher at the Art Academy, has collected over the years.
But “the old and the new” are an all-right-combination with Mr. Hentschel. He’s of the opinion that the abstract symbols of his new brayer works are fundamentally “antique treasures.” 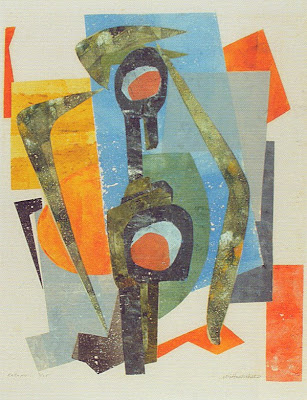 "Admirers of William E. Hentschel, widely known Cincinnati painter and designer, wouldn’t be surprised if the moon appeared one night with its craters revamped and newly tinted with pastel shades…Bill’s newest projects, they’d remark.
Bill Hentschel’s imagination long monumentalized by murals in many important Queen City office buildings only surprises the neophyte. But even the verteran Hentschelian will be stopped in his tracks by the artist’s new brayer paintings now on view at Closson’s Gallery…a premere [sic], incidentally.
The printer’s breyer ink roller dipped in paint is used by the artist to create swathes, half-moons, waves of color.
Waves that surge across panels bearing on their crests exotic birds elliptical Etruscan warrior dancers, Nairobi medicine-men and even an occasional Arabian Nights “roc”. 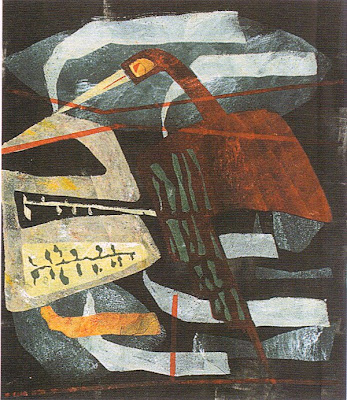 The colors—and sometimes you wonder if Hentschel dips his brayer in vagrant rainbows—are never apologetic. Scarlets and greens jostle elbows, yellow-browns leer at inky blacks. Chromatic delirium, you might say.
But it is his birds that hold your attention the longest. No ordinary birds, of course, snared with Mayan hunters’ nets or wizards from the land of Exotique. My favorite is Ibis, or is it Ibises? These flame-red, long-legged birds could exist only in a dream aviary if Audobon had been captured by Barbary pirates and fed hasheesh he might have depicted such birds."