Calls completed they walk from the studio to a sprawling building in the rear. He puts a torch to pipes leading into a huge brick cone, and soon gas flames are spouting.
It’s really more than a party.
For baking in the brick cone are the results of a month’s labors by the dozen or so artists who come as guests.
The brick cone is a kiln. Stored inside are two to three thousand pieces of pottery molded by the ceramists of the youngest fine arts pottery in America—the [sic] Kenton Hills Porcelains, Inc.
The all-night vigil is kept because the kiln has to be watched every minute of the 36 hours it takes to fire the pottery,
Young Mr. Seyler---he’s 23, and so is Rosemary—is art director of the firm. Miss Dickman, his fiancée, is a designer.
The company was founded by Harold F. Bopp, who became its production manager and ceramic chemist. Mr. Bopp formerly was connected with Cincinnati’s famous Rookwood Potteries [sic], and so were some of the others now with Kenton Hills. 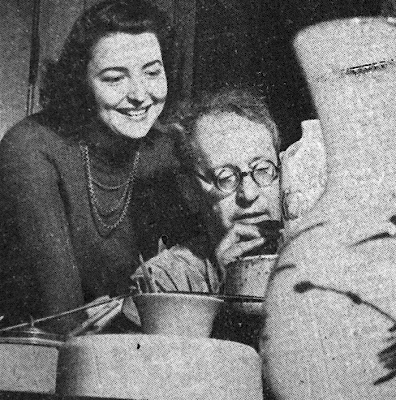 They include William E. Hentschel, noted designer and instructor at the Art Academy, his wife the former Alza Stratton; Raymond Dawson, a caster and finisher, and his son Jack.
It is a co-operative venture. 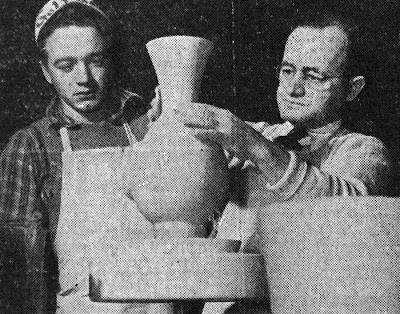 The company started just a year ago, and even now its products are distributed widely.
Noted Cincinnati artists attended the most recent kiln party.
They arrived early in the evening and remained late. They drank refreshments from “seconds”—vases which failed to turn out correctly in the previous months burning.
They watched a demonstration in “vase throwing” (that means vase making) by Harold S. Nash, head of the ceramics department at the University of Cincinnati.
Julian F. Bechtold, the sculptor, gave them a quick lesson in modeling. Before midnight they ate from a make-shift table piled high with fried chicken. Then Rosemary and David called them to the studio.
They had a designing contest, and Rosemary’s mother won it. Her prize was an unfired vase worth $15, and she had to decorate it with her winning design. 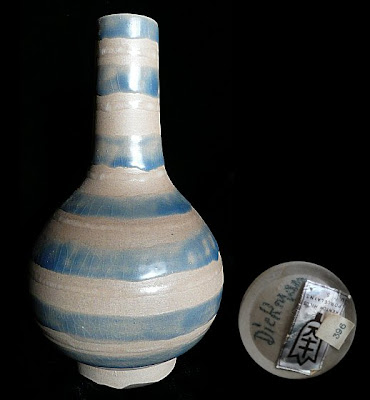 Throughout the party, David kept check on the kiln. The ware being glazed inside would be worth $3000 [sic] to $400 if it turned out right; if not—well, “seconds” don’t bring very much.
“Folks are funny when it comes to art,” the young ceramist said as he marked down hourly temperatures.
“Right now, everybody thinks of war. And so there’s a military trend in fine art. They don’t want to see tanks and big guns on vases, of course. But look at some of our finer pieces—hunting scenes, bows and arrows, Chinese war horses. They smack of the military, and yet they’re romantic. That’s what people like.” 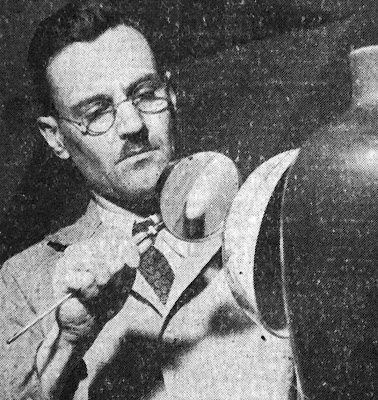 Long after the guests had gone home, Mr. Bopp started shutting the gas off gradually. Several hours later, a brick door leading into the kiln was broken down. Ceramists crowded around to see how their “gamble” had worked.
“It looks good,” said Mr. Bopp, as the kiln men carried out the shiny new vases. And then the designers started working again so they could have another kiln party next month. 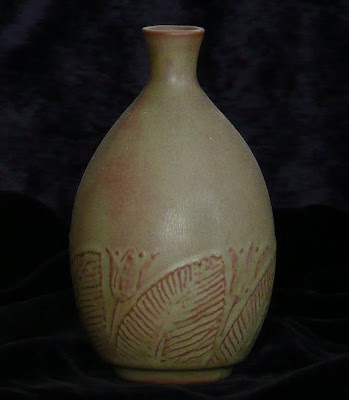 "It was not unusual for Kenton Hills to invite local artists to work at the pottery. Leo Murphy for one, Paul Chidlaw (Art Academy professor and painter) and Harold Nash (ceramics professor at the University of Cincinnati) all used Kenton Hills facilities, even though their initials are not known to have been added to factory-marked pots."