It would not be possible to calculate the great influence of Mr. Barnhorn on the sculpture of the Middle West...He has helped dozens of promising students in music or sculpture over serious financial stumbling blocks...The world knows nothing of these actions; he has always given cheerfully, without any thought of publicity or reaction to his credit.


Clement Barnhorn was born in 1857 in Cincinnati, Ohio. He attended St. Xavier College, then studied woodcarving under the English woodcarver, Henry L. Fry, and modeling under the Italian modeler [Louis T.] Rebisso. Next came a five-year scholarship in Paris, where he was a pupil of Mercie and Puech. He studied drawing at the Academie Julian...He concluded his European studies with six months study in Italy.
Mr. Barnhorn succeeded his former teacher [Louis] Rebisso, at the Cincinnati Art Academy. He was associated with the Academy for over fifty years, as student and instructor. His studio was in the Art Museum, adjoining the Academy.

Most of his work was ecclesiastical, such as the Madonna and Child at St. Mary’s Cathedral in Covington, Kentucky, and the crucifixion group and St. Monica on the façade of St. Monica’s Cathedral in Cincinnati, Ohio. His first important work was ”Magdelen” for which he won honorable mention at the Paris Salon in 1895, and a bronze medal in 1900 at the Paris Exposition.
Several of Mr. Barnhorn’s fountain figures were made in the faience department at Rookwood Pottery, one of the most distinguished being his "Dolphin & Boy" fountain.
Clement John Barnhorn…died in August 1935. He is buried in St. Mary’s Cemetery, in Cincinnati, Ohio.

All Duveneck’s other downtown studios have crumbled long since as sacrifices to progress. In 1897 the painter was at 118 East Fourth. Several years earlier he shared with Clement J. Barnhorn Room 71 of the Pike Building, where the Sinton now stands. There Mr. Barnhorn helped Duveneck model the memorial to Mrs. Duveneck, which was finished in July, 1891.
Mr. Barnhorn as a boy visited the studio at 231 West Fourth that Duveneck had in 1874 and 1875.

Decoration of the public waiting room in the new courthouse with Rookwood pottery tile was assured yesterday when the New Courthouse Building Commission awarded the contract for setting the tile to the Charles McCaul Company for $4,282 as an addition to the contract for the general construction of the courthouse. 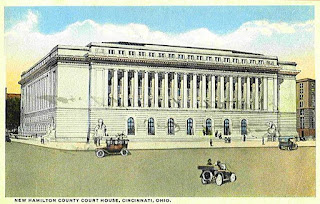 Arrangements have been made by the commission to purchase the tile direct from Rookwood Pottery for $9,000 making the total cost of the Rookwood Room $13,282. C.J. Barnhorn, sculptor, is to design four panels depicting events in Hamilton County of a historical nature. 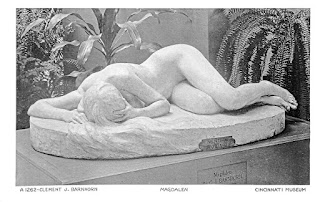 Young artists whose fame lies ahead and older ones who have won their laurels drift in, one by one, at 317 Main street where the late Clement Barnhorn’s possessions will be auctioned at 10 a.m. next Tuesday.
The younger artists, some of whom were the great Barnhorn’s students, look with a certain awe at the tools the sculptor used in his studio in the Art Museum, where he worked until his death in August, 1935. The older ones touch the bronzes and death masks and tools affectionately, smiling at memories of hours spent talking with him while he worked.
Still others come from distant cities—artists and sculptors who knew and revered his art, whether or not they knew the sculptor-artist personally.
There are genuine Duveneck paintings in that display of Mr. Barnhorn’s possessions to go under Joseph Harris’ hammer. There are paintings by Sharp, Weis, Nourse, Daly, Maurer and other famous artists. A few works of old masters are there, some marble figures, old wood carvings, pottery and other valuable works of art.
In Cincinnati, several Barnhorn students have risen to national and international recognition….such artists as Clotilde Zanetta, Charlotte Haupt, Carolyn Zimmerman, Bernice Haswell and others.

When the sculptor-artist died, he left some of his finest things to the Art Museum, including the Duveneck portraits of himself and his twin brother, Henry, and a small portrait of himself, done by Elizabeth Nourse. His own famous work, “Alma Mater,” he had given to the museum before his death.
Mr. Barnhorn...was born in Cincinnati and spent most of his life here, but his fame spread throughout the world. He was honorary curator of sculpture at the museum.