"Back in the seventies I helped Alza Stratton Hentschel move to Lexington Ky from Burlington Ky. and heard a few stories. There were boxes and boxes of Rookwood/ Kenton Hills Pottery and glazing information that I packed. I knew this info was extremely valuable but any time I inquired about [it] to Mrs.Hentschel she became guarded to the point of hostility. Her only relative I saw was her mother whom Alza called "bright eyes". She never spoke a word but had these very intense blue eyes. My three days with her proved ...different? She remained guarded during my employ…We talked of art mostly. She was indeed a wonderful painter as well as she showed me some of her work. I was working in ceramics at the time so we established rapport right away. Any discussion of Billy’s work brought an immediate change in her personality. I thought she may have had mental problems because of her swift changes in mood. Now I think she may have just been a lonely old woman with her memories and a genuine mistrust of everyone."

“In 1951, commissioned to create a mural for a three-story stairway in the Western and Southern Life Insurance Building, Billy painted the 20’ x 99’ work on canvas panels at home, with Alza’s assistance, and then installed it in the stairwell. Entitled “Joys of Living,” his only painted mural, the panels portrayed a surrealistic parade of dancers, musicians, acrobats, harlequins and other fantastic figures ascending toward a quiet garden where a solitary stone cherub perched on a pedestal, pouring an endless stream of water into a tranquil, flowing fountain…Billy wrote to a former pupil who had become an interior designer in New York City....”I painted seriously for a few years and exhibited here and there; but the conviction that a painting should be made available to a person who loved art through some other means than the icey [sic] gallery led me to make these new things...”

“Cincinnati friends of William Ernst Hentschel, long-time instructor at the Cincinnati Art Academy and Cincinnati pioneer in at least two media of artistic expression, learned just yesterday that their associate had died Monday at the Norton Infirmary, Louisville, after a long illness…Born in New York in 1892, Mr. Hentschel came to Cincinnati in his youth. He taught at the Art Academy from 1921 until his retirement in the mid-1950s. He had exhibited works in many places in this country and had done murals for the Carew Tower Arcade, the Rookwood Room of the Union Terminal, the Cincinnati & Suburban Bell Telephone Co. and the Western & Southern Life Insurance Co. buildings. He also had designed for Rookwood Pottery…”

“Services for William E. Hentschel, 70, artist, designer and instructor at the Cincinnati Art Academy for 27 years, were held today at Kerr Brothers Funeral Home, Lexington. He died Tuesday in Louisville, Ky…During his stay in Cincinnati he painted the murals for the Carew Tower Arcade, the Rookwood Room of the Union Terminal, the Cincinnati and Suburban Bell Telephone Co. and the Western and Southern Life Insurance Co. He also was a designer for the Rookwood Pottery.
As a pioneer in cubist expression, he was one of the first to use the airbrush as an artist’s tool. Some of his airbrush work is exhibited in the Smithsonian Institute. He also developed multiple stencils as a mode of expression of modern feeling.
His last exhibition was in January 1962 at the Town Club.” 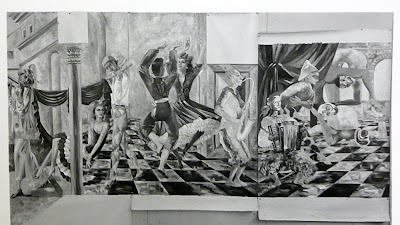 “Charles F. Williams, Chairman of the Board of the Western & Southern Life Insurance Co. and widely known philanthropist, died early yesterday at his home near Forestville…He assisted the late Archbishop John T. McNicholas in founding the Institutum Divi Thomae in 1935 and supplied funds necessary to put it into operation. He also was one of the organizers of Sperti, Inc., formed to manufacture products developed by the Institutum.
Mr. Williams was chairman of the 1932 Community Chest Campaign, general chairman of President Roosevelt’s National Recovery Administration for Cincinnati and Hamilton County; a former President of the Cincinnati Property Owners Association; a trustee of the Cincinnati Institute of Fine Arts; director and trustee of Rookwood Pottery and a past President of the Civic Opera Association…”

"It was said that Mrs. Williams, as executrix, would during her lifetime, indicate which institutions are to benefit from his estate. Williams has five children, Mrs. Elizabeth W. Kyte, Mrs. Margaret W. Herschede, Charles M. Williams, president of the insurance firm, William J. Williams and James R. Williams.” 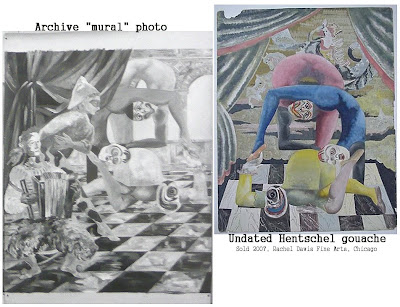 ‘Charles F. Williams, noted Cincinnati philanthropist, didn’t leave an estate of millions as many persons believed, relatives said Tuesday.
Mr. Williams…had given away the bulk of his vast fortune to charities many years ago.
The $379,012 [or $3,280,842.29 in 2012 dollars] listed on his inventory was all he had left relatives said… 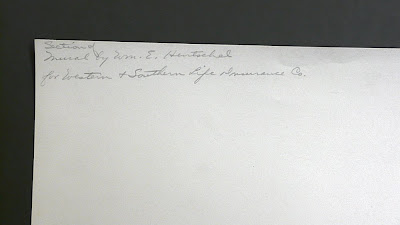 Hentschel's handwriting in pencil on reverse of maquette photos.

"Still checking at W&S regarding the mural you are asking about. W. J. Williams has no recollection of this mural. He is 93 years old and has been there many, many years. Can you tell me what the subject matter of the mural was. This may help jog someone's memory." 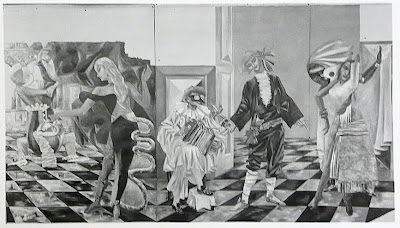 Another area of mural...

"The Cincinnati Art Museum’s archives have several black and white photographs of what I imagine is a study (maquette) for the work…Pencil notations on the photos’ reverse sides in Hentschel’s hand ID the images as photos of his mural for Western & Southern.
An obscure but detailed biography of Hentschel published in an exhibition catalog by a defunct Michigan art gallery in the late 80s (Parade of Discovery) contains the best print description of the mural and its installation by Billy and his wife, Alza...The artwork is credited on Hentschel's undated resumes and in a dated brochure for Hentschel's November 30 to December 30, 1951 retrospective exhibition at the J. B. Speed Art Museum in Louisville, documents held in the CAM’s archive are also mentioned in Mr. Hentschel’s June 21, 1962 obituary in the Cincinnati Enquirer and an October 14, 1956 Enquirer feature story.
It is my belief that the mural was commissioned by Charles F. Williams and its installation and/or lifespan inside the 4th & Broadway building could have been hampered or halted altogether by the death of Mr. Williams on September 11, 1952…I have talked with a custodian, however, who says he remembers another older coworker talking about the mural and the special tiles in the staircase that connected the lobby with an employee lounge/cafeteria on the 3rd floor.
I cannot imagine the mural was destroyed but, of course, the possibility in 58 years of time exists…If the mural is not still stored in some W&S property it could have been donated to a group or institution or it could have been cut down into smaller and more manageable sizes and sold or distributed.
I’d be grateful for any scrap of information no matter how small regarding this painting.
I look forward to further emails. I’m always available to answer any question you may have…" 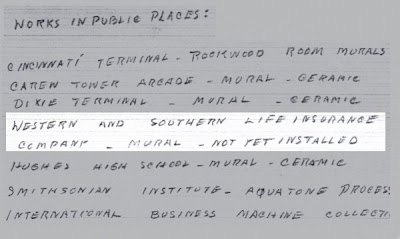 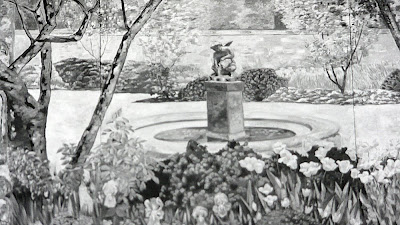 The fountain goal in Joys of Life...

"I appreciate your efforts in pursuing this matter with current W&S employees and simply responding to my inquiries.
My goal is not to be a burden.
Among the small group of people interested in the history, artifacts and people associated with Cincinnati’s Rookwood Pottery, the fact of a Western & Southern mural by William Hentschel is taken for granted as an element of the published record even if no one, it appears, has ever laid eyeballs on it.
The mural’s fate, or its lack of one, will, I assure you, be news to these people.
I talked with a man described to me as a “custodian” who reported having a conversation with “an older custodian” who remembered the stairway and painting.
However, I’ve also talked with a few other older, long-term W&S employees and these people had no memories of stairway or mural.
I perfectly understand that 58 years can be an eternity.
However, the intersection between Cincinnati’s business community and its artistic one over the latter 19th and entire 20th century is of tremendous interest to historians.
Certainly everything I’ve read and heard about Charles F. Williams suggests a man deserving of a wider historical recognition.
An impartial read of the limited public record and a basic knowledge of human motivation suggests the mural commission within a year of Mr. Williams' death was an attempt to leave a more lasting public cultural imprint to survive the unforeseen social, political and business convolutions of the 1950s and 60s…Certainly, Mr. Hentschel felt this way.
I was hoping, with the images I sent, that, in addition to present day employees, you might be able to make inquiries or point me toward younger members of the Williams family who may have some recollection of family lore and artwork…I didn’t expect present day employees to relate in any way to the Art Museum archive images I transmitted to provoke, or “jog” as you wrote, memories in Williams family members or ancient, retired employees or executives.
Additionally, I would be very grateful for access to any material related to the relationship between Mr. Williams and Mr. Hentschel that may still exist in family or company files.
Also, as annual reports tend to showcase artwork and or styles favored by company leaders, I’d be interested in looking at any such material produced by W&S from the 1951 and 52 time periods.
The present published record, while limited, includes Hentschel’s W&S mural among Cincinnati’s artistic treasures.
The mural’s fate, lost or found, for good or ill, should, without speculation, be a part of that record.

NOTE--The existance of the Cincinnati Bell mural, identified in news accounts from the 1950s as ceramic, is also in doubt. The mural would have been installed in the 7th Street HQ in downtown Cincinnati. All requests and contact efforts over many years have been rebuffed by Bell company employees with one exception. This employee was happy to assist and volunteered the information that a book had been assembled of Cincinnati Bell's art collection and "given to just about everyone". This employee promised to send a copy of the book to me, he said, "plenty of extra copies" exist but a copy was never forthcoming and repeated calls to this person were not returned.