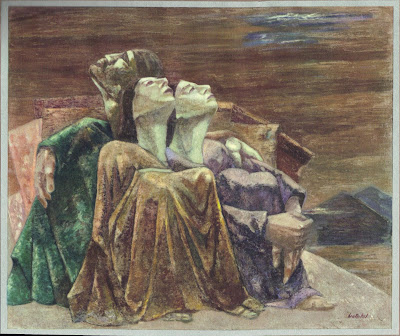 "The artist states that in Sphere Melody he seeks to evoke “that inner music which is stilled until great adversity awakens the trembling heart; at which time the spirit of man, vibrant and aware of its part in the grand universal harmony yearns to be re-attuned to the divine melody, envisioning from the midst of present chaos and despair the Hope for a world which will find Peace and Brotherhood at last.”
William E. Hentschel, born in New York in 1892, is a Kentuckian by adoption, living at Burlington, Kentucky, in the pleasantly restored country-seat known as April Hill Farm. He spent the early years of his career as a designer of textiles and ceramics, working at first in the East and later in Cincinnati where for a number of years he was a noted artist at Rookwood Pottery. At this period began his association as a teacher with the Cincinnati Art Academy which happily continues to the present, during which time he has inspired a generation or so of younger artists.
Mr. Hentschel, like other important modern men of art, has explored the ways and means of various media of expression. His paintings, executed in aquatone, water color, casein, as well as oil, have been widely exhibited not only throughout the United States but also in Europe and Australia. His mural work may best be studied from important examples in Cincinnati."

--Printed text on onion skin cover over the lithograph, itself glued at the top to a gilded paper backing within a red string-bound, greenish-gray construction paper cover. 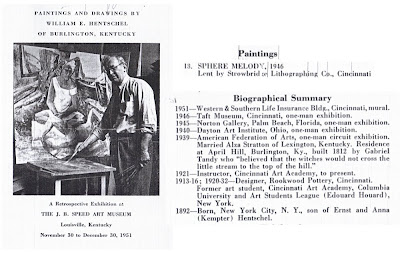 This handbill for a 1951 retrospective exhibition at Louisville's J.B. Speed Museum lists Strowbridge as the owner of the original painting, 'Sphere Melody', and mentions Hentschel's Western & Southern Mural and a cute tale about April Hill farm.