'Success' Has Many Fathers 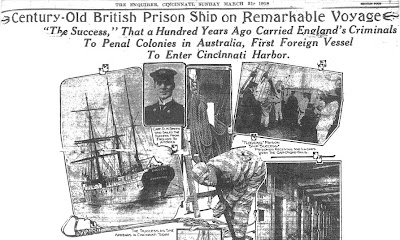 “…The British convict ship Success, built 138 years ago in India of priceless teakwood, asserted by the British Museum authorities to have been growing in the forests before Christ, is anchored in Cincinnati at the foot of Vine street. She is the oldest ship in the world and is the last of England’s fleet of felon transports…The [story of the] Success is a most extraordinary one and is more remarkable than any that could be conceived in the imagination of the fiction writer…The Success was launched in 1790. She was constructed at Moulmein, British Burmah [sic], under the shadow of the old pagoda celebrated by Kipling.
Though built by coolie labor, her builders were the best of woodworkers for apart from her stanch construction there are still remains on board of really beautifully executed woodcraft…In 1802 the Success fell from caste and became an “ocean hell,” a devil ship, which, instead of harboring the high and mighty potentates of the gilded East, became the home and the scourge of England’s worst criminals, the born malefactors, as well as the unfortunate, whom a terrible penal system manufactured into a convict and an outcast.
It was then that these rows of gloomy, horror-haunted cells were built for the reception of her human freight to be carried in them without sunlight [and] ventilation, almost without food, with the scantiest of raiment and the utmost infliction of cruelties and depredation across the 16,000 miles that separated England from her colonies in Australia…The first actual record of convict transportation dates to James I, when convicts were brought to Maryland and Virginia. At that time His Majesty’s colonies and plantations in America needed laborers. It was decreed that prisoners nominally sentenced to death should be handed over to contractors, who transported them to America and sold them at public auction to plantation owners. This was before African slavery. Competition was keen and prices ruled high.
The War of American Independence closed our ports to Great Britain’s criminal sewage. It was then that Captain James Cook established for England, in Botany Bay, in the South Seas, a penal settlement…They described pestiferous dens, overcrowded, dark, dirty, illy ventilated and deprived of pure air. Idleness, drunkenness, vicious intercourse, slackness, starvation, squalor, cruelty, chains, awful oppression and everywhere culpable neglect…It was believed then that the transportation of convicts would correct abuses, but it proved a failure…[On the] initial trip 1,695 male convicts were taken, also 68 women convicts. One hundred and ninety-four of the men and five of the women died during the voyage, and 116 died soon after landing. The master of each ship was paid head money for each prisoner embarked, However, it paid them more to lose a prisoner owing to a saving in food. It is a fact that many convicts were purposely starved. A convict would not report a death for the reason that he and his survivors would share the allowance of the dead…In 1801 the discovery of gold in Australia attracted emigrants from all over the globe. Australia was the Mecca for specialized outlawry. Bush-ranging became a profession. There were no prisons in the newly created city of Melbourne and meanwhile the criminal element was coming in an endless stream. A call was sent to the master of the Success and others in the felon fleet at Van Dieman’s Land and Botany Bay to anchor off Williamstown, a few miles from Melbourne.

Hobson’s Bay was then an open roadstead. There was no harbor accommodation. Convicts were taken off the ships to work in the quarries preparing stone to build a breakwater. They were also put to work erecting public buildings, including a prison. These men labored in chains during the day and at night went back to the Success and other ships to sleep in stifling cells. So much disorder arose that the convicts were useless as workmen and the ships were ordered out of commission, except as confinement hulls. It was in 1851 that the British Government declared that the Success should remain for all time in Melbourne as a confinement hull.
For her there was no peace in old age. She had on board 230 desperadoes. No ring of buoys around the vessel’s anchorage could prevent occasional wild rushes for escape and two sensational outbreaks on her attracted so much attention in 1857 that the end of the awful system was declared.
The first of these two exceptional outbreaks was inspired by one Captain Melville (real name Frank McCallum) who was a native of Paisley, Scotland. It was while serving time for stealing a pie from a baker’s cart that he made his escape and became the leader of a band of bush-rangers. He was recaptured and given a term of 32 years. Soon after he stabbed a guard to death on the Success, using a sharp spoon for a weapon. October 22, 1856, he assisted in killing two Success guards, Owen Owens and John Turner. When arraigned for trial he pleaded his own case, was sentenced to death, but his disclosures of the abuses of the system on the Success and her sister ships caused his conviction to be quashed. Again he went back to his cell. He was found dead. It was said that he killed himself, but it was generally understood that officers of the Success had ended his existence to stop his recital of tyranny and torture to the convicts.
In March of the next year Captain John Price, Inspector General of the Australian penal system, who originated the tortures to which the convicts on the ships were subjected, was beaten to death by prisoners. Seven convicts were hanged for this at Melbourne within a month following the tragedy. This wholesale execution put the finishing touch to the Success and other convict ships. Preachers and the press flamed into violent protests against the wrongs [perpetrated] in the name of justice. Prison reform doctrines in the novels of Dickens and Reade had penetrated Australia, with the result that a Select Committee on Penal Affairs made a report to Parliament…For some years later—from 1860 to 1868—the Success was used as a women’s prison; then she became successively a reformatory ship and an ammunition store. A little later all the prison hulks were ordered to be sold on the express condition that they were to be broken up, and their associations lost to recollection of the people of Australia. By clerical error, however, that condition did not appear upon the terms of sale of the Success. Hence she remains the only British convict ship afloat on the seven seas. In 1885 the old ship was scuttled and sunk in Sydney Harbor. She remained under the picturesque waters at Ft. Jackson for five years, and was then, at an enormous expense, raised to be exhibited to the present generation as an exceptional object lesson and a vivid reminder of an almost forgotten period in penal history. She has since then been on exhibition not only in the Australian colonies, but has twice circumnavigated Great Britain and Ireland. Her visitors have numbered over 15,000,000 people, including the late King Edward of England, the Prince of Wales, the Prince and Princess Henry of Battenberg, and other members of the English Royal family, the German Emperor, Captain Dreyfuss of Devils Island, Lord Beresford, the late Right Hon. W. E. Gladstone and many other notables. 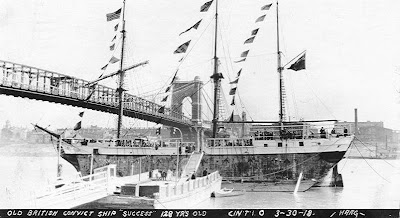 In 1912 she attempted what was perhaps the greatest feat in all her remarkable career—to make the passage across the Atlantic under her own sail, unaccompanied by tug or steamer. The shipping world was aghast when the voyage was projected. Impossible, said every man that ever sailed the seas in ships, that this century-and-a-quarter-old hulk could brave the spring hurricanes of the Western ocean. But a gallant crew of adventurous souls, under the command of Captain D. H. Smith, hoisted sail and took her out of Glasson Dock, near the port of Liverpool, on the very day that the ill-fated Titanic left the port of Southhampton. For 96 days she battled bravely, her stanch old hull defying the crashing gales and mountainous seas, and at length made port in Boston Harbor with a crew worn out and half-starved, but bravely triumphant.
Her arrival in Cincinnati is especially interesting for the reason she is the first foreign vessel that has ever entered this port. Her battles with the ice in the Ohio River this winter proved the most dangerous of all her experiences since leaving England on her memorable voyage in 1912. It was [thanks to her remarkable] construction that saved her from the fate of so many of our own river craft, which were crushed to pieces by the grinding ice.
No museum in the world contains the same relics as may be seen on the Success. Around the high bulwarks are suspended all of the agencies of tortures that human minds of a century ago could invent. In the “tiger’s den” is depicted the murder of Captain Price.
The “tiger’s den” derived the name from the ferocity of the convicts confined there. They are credited with fighting until all were hammered into helplessness. Order was restored again and again by guards firing through the bars and over their heads. There is the “black hole.” In it is a wax figure stooping in weariness. The ankles and wrists are chained. Men have been kept in that hole for 100 days.
In the cells on the middle deck may be seen wax figures of the “six men of Dorset.” These were the first trade union martyrists, not long ago honored in England by the erection of a marble shaft. The price of corn had risen, while that of wages had dropped. The “six men of Dorset” united to effect a raise of one shilling. For this the “six men of Dorset” were deported to Australia for seven years.
Ranged on the same deck with the martyrs of unionism are six wax figures of Dan Morgan, arch fiend of Australia, who killed 92 men; Captain Starlight, the man of mystery, who stole race horses, always hunted up an officer to dine with and who won one of Australia’s richest turf prizes with the thoroughbred Rainbow, which, of course, he stole; Frank Gardiner, after serving two terms on the Success for celebrated thefts, was liberated upon promise to leave the country, and ended his days in San Francisco as a hotel proprietor, and others of renown in Australia’s record.
On the lower deck, “the home of the bad men,” are the wax figures of Jacky Williams Hill, alias Burgess, whose blasphemous confession startled the world; Henry Garrett, who boasted of having spent 52 Christmeses in confinement; Owen Suffolk, the Australian poet, who stole 10 cents and whose poems of love and devotion won the admiration of Australians and the money prizes of magazine publishers; Daniel Donovan, who after serving 16 years on the Success, was released to die and immediately afterward it was ascertained that he was innocent; John Hefferman, the giant, who received a call from his mother, and as she slipped a ring on his finger fell lifeless at his [sic] feet; Frederick MacDonald, who flogged prisoners for 40 cents each, and after his release from the Success was shot dead in Melbourne by a former convict; the Kelly gang, shown as modern Australian outlaws, but they were never prisoners on the Success. The capture of [the gang] cost Australia more than a half million dollars [more than $7 million in 2012 dollars]. Kate Kelly was the spy from the days they first stole sheep until they murdered by wholesale.