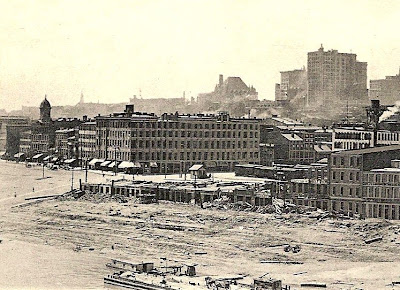 “The ‘Bethel’ was what the river roustabouts, the longshoremen, the deckhands come off the boats, as these made port here…called a “church boat”…It prospered. There, in what was then the roughest, toughest, more benighted and all-around forsaken section of the city, men whose every alternate word was a curse and whose angering meant a blow, or a knife-thrust, came, very quickly, to respect keenly the little band of sincere workers on the humble houseboat…It grew…The ‘Bethel’ bought a building…Every boat approaching Cincinnati from Louisville or from Pittsburgh, looked forward, as sailors use the term, to where the cupola on the roof marked port and the new ‘Bethel’.”
--Cincinnati Commercial-Tribune, November 11, 1928

Image: cincinnativiews.com
Posted by Sean at 11:20 AM