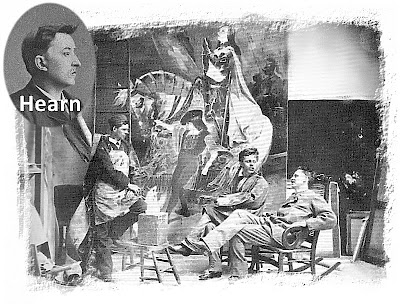 Lafcadio Hearn, inset, Dengler, Duveneck and Farny in Duveneck's studio before the lost Prayer on the Battlefield, painted by Duveneck & Farny for the 1875 Cincinnati Industrial Exposition.

“Mr. Barnhorn as a boy visited the studio at 231 West Fourth that Duveneck had in 1874 and 1875…Duveneck, just back from his four student years in Munich, at that time had a class in painting at the Mechanics’ Institute…In this class were Kenyon Cox, [Alfred] Brennan, [Robert] Blum, [Joseph Rodefer] DeCamp and [John Henry] Twachtman…Lafcadio Hearn, then a reporter for The Enquirer, pretended to be one of Duveneck’s pupils so he could see the lovely blond who posed for various Cincinnati artists during the summer of 1874. She was 19 years old, six feet tall, read Byron, took no pay and declined to announce her visits in advance…Francis X. Dengler, a Covington sculptor of Duveneck’s age, also painted the golden-haired Amazon. The anonymous model posed in both Duveneck’s studio and his [Dengler’s] own, for Henry F. Farny.”
--Cincinnati Enquirer, June 8, 1930

Photos: Wandering Ghost, by Jonathan Colt, 1990 and the Cincinnati Art Museum
Posted by Sean at 3:30 AM