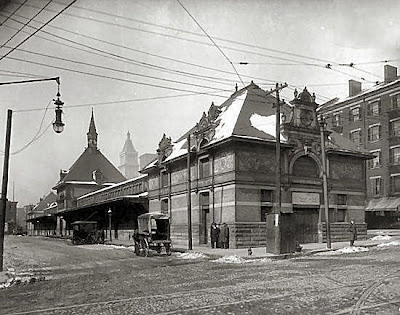 The corner of Pearl Street & Broadway...note the Central Trust tower in background.

Suggestions for transforming the comparatively inactive Pearl Street market house into a thriving business center were offered before the Council Committee on Markets, in the City Council chamber, Tuesday, by farmers and merchants in the vicinity. There are 64 stands inside the market house and 51 of them are vacant, it was reported by George F. Hyrich, superintendant of markets. He also stated that the city was losing about $2,500 a year on market abuse.
He suggested that the market ordinance be amended so as to do away with curb stands, which bring a fee of $15 a year, and force the hucksters and gardeners to move inside of the market house. The rental inside is $75 a year, and it was suggested by Mrs. Corinne McCloskey McEwan, chairman of the committee, that this might be reduced, if necessary, to $50 or $60.
Bennett Behymer, farmer, of Clermont County, suggested that inside stands be provided for farmers. He was requested to get the views of other farmers…Merchants complained about farmers standing in front of their stores on Pearl street and Broadway practically all day, and it was suggested that an ordinance be passed limiting farmers’ stands on the streets to the night time from 6 p.m. to 7 or 8 a.m…On motion of Floor Leader Cliff Martin, Council, as per annual custom, voted unanimously Tuesday to have no meeting next Tuesday in order to give all the members an opportunity to attend the opening baseball game at Redland Field.