No engagement of the summer surpasses in wide interest that announced Monday of Mlle. Hallina Feodrova [sic], a favored and favorite member of society’s artist group, to Mr. W. C. [sic] Hentschell [sic], new head of the department of design of the Cincinnati Art Academy…They are to be married in Cleveland, where Mlle. arrives this week after a month or more in New York. Both Mr. Hentschel and his bride-to-be expect to return to Cincinnati very soon to resume their work.

--Unidentified newspaper clipping from the week of August 28, 1921 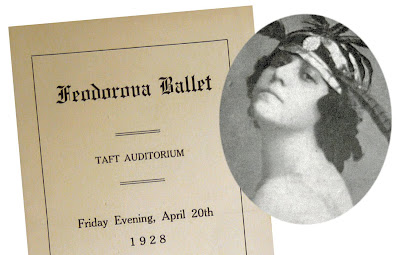 Billy returned to Cincinnati in 1920, resumed his position at the Rookwood Pottery and began, with renewed intensity, his courtship of Halina. In 1921, Billy…announced his engagement to Mademoiselle Feodorova…The couple was wed, September 2, 1921 in Cleveland, Ohio…the Feodorova-Hentschel Studio—opened on the corner of Oak and May Streets around 1923—hung with huge batiks depicting characters from various ballets…The couple’s tiny upstairs apartment was similarly adorned with Billy’s work…so consistent with the praises of audiences, art reviewers and society columnists—that little notice was given to the fact their prodigious productions were, for the most part, economic disasters…Most sources acquainted with the couple describe Billy’s marriage to Halina as “difficult” or “turbulent”…in 1927…The relationship between he and Halina grew to be increasingly less collaborative…The flurry of creative activity with which he met the late 1930’s, was fairly characteristic of Billy; but it did seem to represent an attempt on his part to compensate for a failing—or failed—marriage. On returning from one of their customary summer sabbaticals to Maine-----in a final, heated argument at a traffic light, according to one account—the couple was separated and Billy withdrew to the sanctuary of his studio, his ceramic work and his classroom. 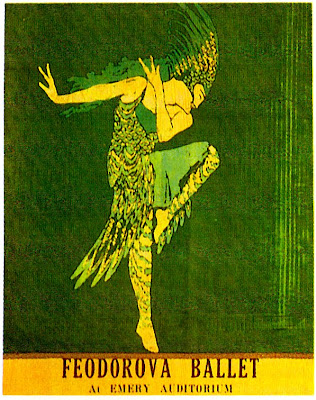 Billy delighted in stimulating young minds, often spending long Saturday afternoons at the Academy in conversations with a handful of students…Among his students was Alza Stratton, a native of nearby Lexington, Kentucky, a poised and lovely woman in her late twenties…There were rumors, around this time, that Billy was seeing “another woman”—a student. Whether these reports referred to Alza or whether Hentschel was separated from Halina at the time is not clear…Alza Stratton returned to Lexington where she and Billy were married, November 18, 1939—the same date that his divorce from Mlle. Feodorova was granted in Cincinnati. 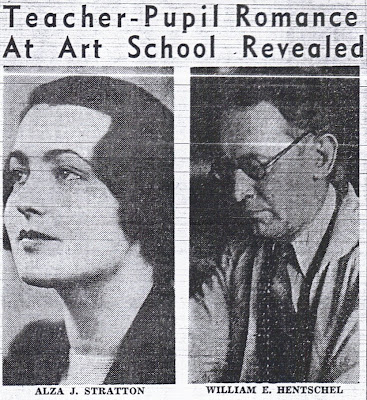 William E. Hentschel, noted Cincinnati artist, figured in a teacher-pupil romance Thursday when friends learned of his marriage to Miss Alza Jessamond Stratton of Lexington, Ky., who studied design with him at the Art Academy here.
The bride is the daughter of Mr. and Mrs. Jesse Stratton, Lexington Ky. Formal announcements of the wedding disclosed that it was quietly solemnized at the home of the bride’s parents on Nov. 18…Hentschel is 49. His bride is 28. They are at present honeymooning in Tennessee, where they will remain over the holidays. On their return here they will establish at 209 Riverside Drive, Covington.