Thanks to the efforts of blog reader James Coots, Jr. and his wife, the mystery of the origins of William Hentschel’s ‘Sphere Melody’ lithograph has been solved.

The 7 ½ “x 8 ¾ “ print came into my possession after I purchased it in an Ebay auction many years ago.
The lithograph was lightly affixed at its upper edge to a 9”x 8”sheet of gold foil paper within a faded 12 ¼ “ x 13 ¼ “ green construction paper folder secured with red twine.
A sheet of onion skin with the dimensions of the green folder and printed with uplifting biographical text on its lower half was fixed between the green paper cover and the Hentschel lithograph.
The print did not bear the mark of the lithographer. 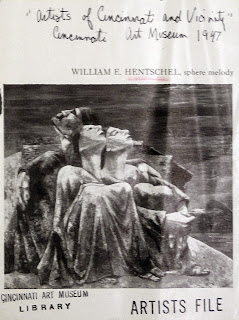 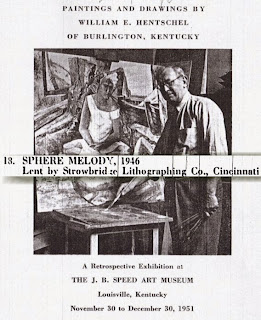 The Speed retrospective brochure (also available as a .pdf in the on line Speed archives) lists the Strowbridge Lithographing Company as the then owner of the 1946 oil on canvas.
The Speed brochure indicated the likely maker of the print was Strowbridge and that this famous maker of circus posters was likely emulating an art marketing technique originated in 1934 and continuing through the 1950s by Chicago Tribune reporter turned art publicist Reeves Lewenthal’s Associated American Artists.

Jim Coots and his wife, when they emailed in early 2014, had found a copy of the ‘Sphere Melody’ lithograph, in its original mailing envelope, in the attic of a house Jim was demolishing.
Finding art galleries unhelpful they searched online, found my April 2012 'Sphere Melody' blog post and posted a comment on ‘The Mural Vanishes’ page. I wrote and asked if they could photograph the original envelope and post mark along with the print as they found it. They very kindly complied and their images solved a mystery.
The lithograph of ‘Sphere Melody’ was mailed to clients of the Strowbridge Lithographing Company as a promotional Christmas gift on Tuesday, December 18, 1951.
The total number of prints mailed in 1951 is not known, possibly a few hundred, and modern survivors, it’s safe to guess, are likely rare.
With his new Western & Southern mural commission capping a decade of success that included distinguished foreign and American exhibits of his Aqua Tones and oil paintings, increased commercial design success, new CAA classes in television graphic design and a lucrative business relationship with Ruxton Products’ Casein emulsions as a spokesperson in testimonial ads and in a widely distributed Ruxton leaflet entitled ‘Techniques and Methods of Casein Painting by Hentschel’, the Christmas of 1951 must have been one of Billy’s best.

Note: The United States Postal System, sadly for historical purposes as indicated in this post, no longer post mark processed mail with location, time and date information that can be read with the naked eye.