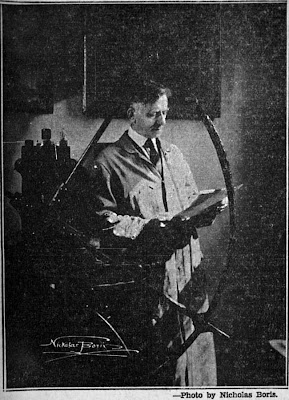 Corrected digital copy of photo printed with the newspaper text.

Here is E. T. Hurley, noted Cincinnati etcher, beside his historic old press in his studio, 2112 St. James Avenue, Walnut Hills.
Hurley has made about 2,000 etchings of Cincinnati, including about 100 of Mt. Adams, and all have been printed from this press.
The press, incidentally once was used, years ago, by a famous counterfeiter. The famous detective, William J. Burns, lived in Cincinnati and worked for half a year on the case. He succeeded in bringing the counterfeiter to justice. The man reformed and became a useful citizen, joining Uncle Sam’s Secret Service Department and helping the Government in many cases.
When the counterfeiter gave up his counterfeiting career, Hurley discovered and bought the old press which since has been dedicated to the cause of serving and reproducing beauty as observed and etched by Hurley in and about Cincinnati.
Some of the proofs off this press are in the Congressional Library, New York Public Library, British Museum, and in other museums. An etching from this press won for Hurley, the Frank G. Logan medal for etchings, awarded by the Chicago Arts’ Institute in 1921. About 25,000 proofs of etchings of Cincinnati’s hills, rivers, streets, canals and other points of scenic interest and beauty have been printed by Hurley on this press.