BY LIBBY LACKMAN
Of The Enquirer Staff

IN THIS SHOW, the adults are still running things. And the kids like it.
It started out that way 29 years ago, when Mme. Feodorova wielded a strong hand over a select group of that generation’s young ballroom dancers. It continues today, with 11-to-14-year-olds lapping up a lot of good, old fashioned discipline.
Until recently, the Town Class, as it’s called, shied from publicity. Now its sponsors have invited a spotlight to illustrate how boys and girls respond to hearing en masse what they heard at home.
“NO CHILD wants to be an oddball. This is sort of mob psychology,” says Mr. George Gallas, who has been director of the class since 1952.
“I want every boy who is chewing gum to get rid of it. The girls, too.” Mr. Gallas announced at the spring party of sixth graders.
A few unabashed dancers parked their offending wads, hardly interrupting their participation in a fox trot contest.
“Posture is what counts. If it’s bad, I don’t even look at their feet,” confided Mr. Callas, as he kept his judge’s eyes on the contest. 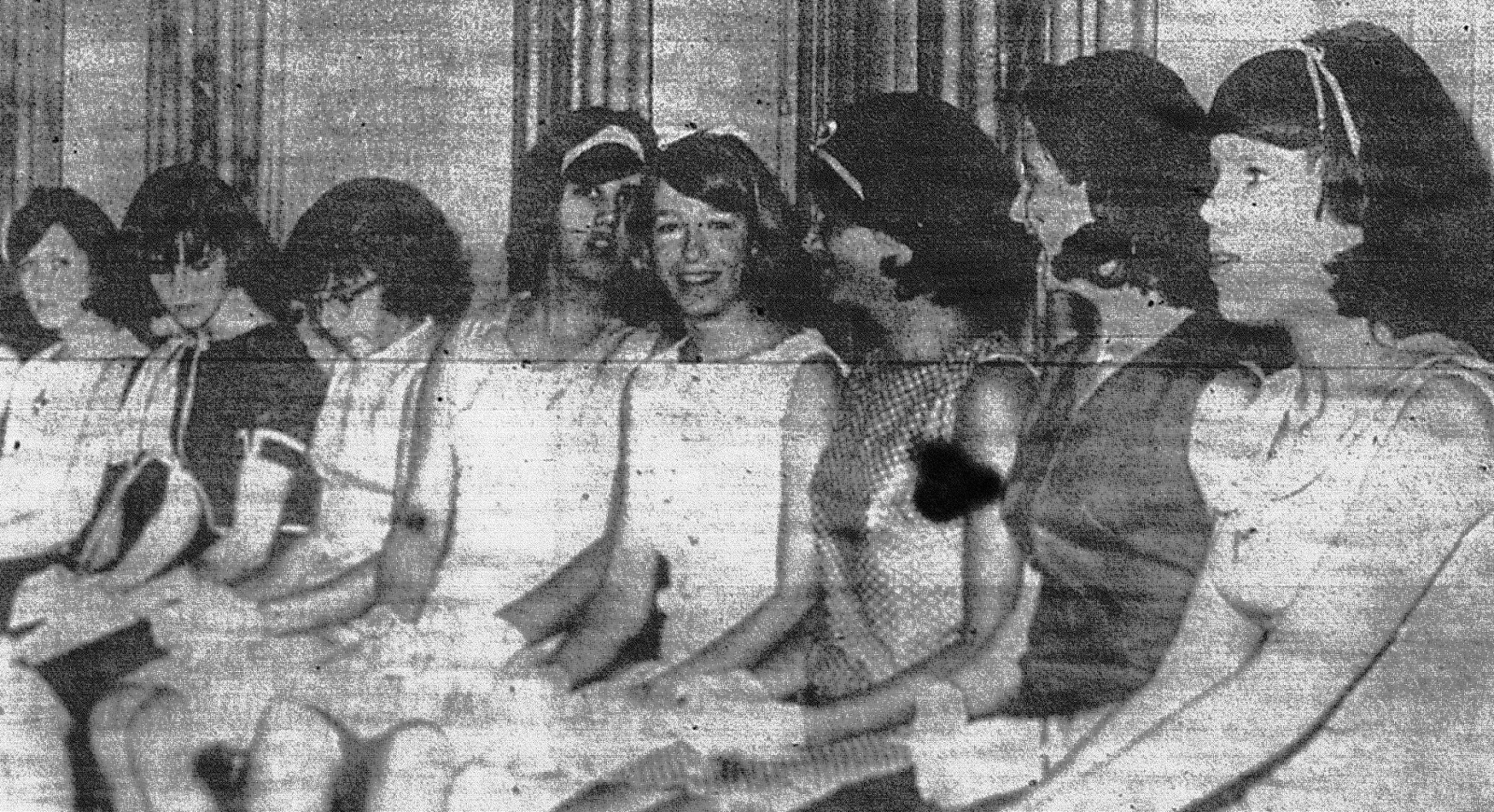 WITH NO EXCEPTIONS, the girls in the class of 125 wore two wardrobe “musts” for their age group, white ankle socks and white cotton gloves. With few exceptions, the boys sported dark suits. An occasional plaid coat was explained away by Mr. Gallas as allowable because it was a party.
“Children should know the difference between behavior in a ballroom and on a football field,” said Mr. Gallas, pointing a friendly finger at a group sitting down after a dance number.
“Boys! Remain standing until the girls sit down,” he called out. “And, girls, sit up. Backs straight.”

Similar scenes are repeated on 24 Friday evenings during the school year, alternating with fifth and seventh graders in one-and-one-half-hour sessions each week, sixth and eighth graders on a similar schedule the other week. The setting is the Veronese Room at the Hotel Alms.
SETTING POLICY is a board of 12 mothers, representing different schools in the city. The classes are by invitation, but not confined to private schools. When the 125-member quota for each class is filled it is closed.

Standing by, not only as a board member but as counselor, is Mme. Feodorova, known in private life as Mrs. Halina Hentschel.* Her name has been “sacred” to parents seeking poise for their children, ever since the former ballet dancer came here from Russia with Pavlova, and stayed.
“Social etiquette—or deportment—comes first in the classes, ballroom dancing second,” said Mr. Gallas who, with his wife, performed as a professional dancer for several years all over the world.

The white gloves apply to girls in all the classes, but the ankle socks are allowed to give way to stockings for the seventh and eighth graders.
“Children want to be told what to do. Then they conform,” Mr. Gallas said from wide experience.

THEIR CONFORMITORY seemed in no way to dampen the fun of the evening, as some of them tried the newer dances, others stuck securely to the fox trot.
Every lesson, the class’ director said, has to be repeated constantly, on the theory that only by repetition can the actions become natural.

“That’s why I keep telling the boys to say, ‘May I have this dance?’ There is no other way to say it.”
For the boys, the lessons include the proper way to hand a girl a cup of punch, at refreshment time, and the proper way to hold a girl while dancing. For the girls, they include the constant reminder that when walking to a door they should stand back to allow the boy to open it for them.

FOR BOTH BOYS AND GIRLS, it’s the trip down the receiving line, at the end of the evening, where stress is put on shaking hands firmly while looking the adult host and hostess in the face, and on saying “good evening” in a clear voice.
“It’s one and one-half hours of constantly drumming in good behavior and poise,” summarized Mr. Gallas.

*Four years after his death and 26 years after their divorce, Halina Feodorova must have still wanted the association with William Hentschel even as Billy's widow, across the Ohio river in Kentucky, was recovering portions of his trashed W&S mural.