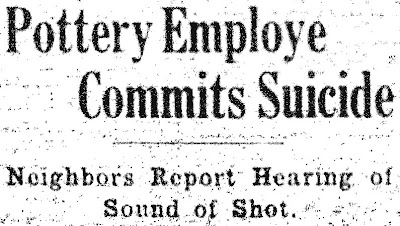 "August Rosenacker, 57, an employee of the Rookwood Pottery Company, was found dead in his bedroom at 1817 Elm Street early Wednesday.
He had a bullet hole in his head. A pistol was lying by his side. Coroner F.C. Swing said it was a case of suicide.
Rosenacker, according to his daughter, Mrs. Doris Brutsche, with whom he made his home at the Elm Street address, said he had been ill Tuesday night.
“He came home with a pistol and said that he was tired of living and was going to end it all,” Mrs. Brutsche told Coroner Swing. “I pleaded with him to get rid of the gun, but he refused. Fearing that he would harm one of my four children, I left about 5 p.m. When I returned Wednesday about 7 a.m. I found him dead.”
Neighbors said they heard the sound of a shot shortly after midnight.
Rosenacker had been separated from his wife, Mrs. Cora Rosenacker, for two years. She accompanied her daughter to the county morgue to claim the body."