"The Pauline of the Panties" 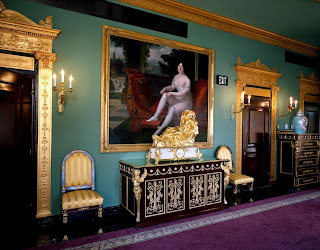 "For many years the St. Nicholas Hotel, at Cincinnati, has displayed upon the walls of the gentlemen’s parlor a painting of the earlier portion of the nineteenth century…It represents Pauline Bonaparte, The Princess Borghese, in all her undraped charms and of the size of life. She is not, like the Duchess of Ferrara, standing as the model of Titian, for his Juno or Flora. In the true republican spirit of the dawn of our century in France, she is represented as she lived…the superbest specimen of the vital life and beauty of his [Napoleon’s] family…her body is but thinly veiled in a scarf of gauze; she has no other drapery than her silken stockings…She appears to be a woman weighing one hundred and fifty pounds or more…In the earlier days of the proprietorship of this painting by the St. Nicholas Hotel, it was looked upon as such a possession as a museum, like that once managed by Hiram Powers, in Cincinnati, might desire to have. The increasing culture of the past twenty years has removed this picture from the suspicion of sensationalism, and given it credit according to the views of the enlightened men—King Joseph Bonaparte, of Naples and Spain, and Nicholas Longworth, who successively owned the canvas…Mr. Longworth, who was the first man in all the West to appreciate paintings entailing a laborious research…Mr. Longworth, indeed, had come from the State of New Jersey, where King Joseph Bonaparte made his home…The fame of Bonaparte’s paintings extended through that State, and as a souvenir, both of republican art in France and of Joseph Bonaparte’s refined exile in America, the picture was purchased at a sale of Bonaparte’s effects, and brought to the West. At the time, however, the West was not prepared for fine and radical art like this, and the painting is said to have been stored away by Mr. Longworth until such time as his fellow-citizens would grasp the idea that “to the pure all things are pure”…It was only by the strange accidents of a revolutionary age that it fell into the possession of Mr. Roth, of the St. Nicholas Hotel, who purchased it at the auction of Nicholas Longworth’s treasures….Pauline Bonaparte was considered the most beautiful woman in France…She died in 1825…Not improbably this picture was painted for her brother Joseph, who brought it to America about 1816…Now as to the artist: Louis Benjamin Marie Devouge was born in 1770, and was the pupil of Regnault and of David, spent much of his time in Russia, was for a time a professor in the college of Lyons, and left a few of his paintings in France, as a “Descent from the Cross” at Orleans, and a“Resurrection” in Bretagne, besides many pictures in St. Petersburg…No doubt the painting of Pauline, naked in gauze, was made in Neuilly, a suburb of Paris…."
--“The Picture of Pauline Bonaparte”, lost St. Nicholas Hotel brochure, signed GATH for famed Civil War correspondent George Alfred Townsend, The Schulte Printing Works, Cincinnati 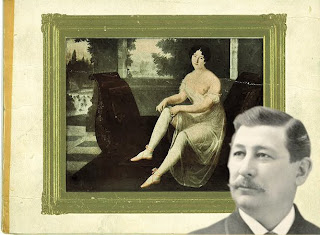 Cover of lost St. Nicholas brochure with photo of text author George Alfred Townsend
"John Ringling, well known showman and art connoisseur, has purchased from the widow of Edward N. Roth the famous portrait of Pauline Bonaparte, sister of the great Napoleon. For many years the picture adorned a wall of the men’s lounging room of the old St. Nicholas Hotel and had a national fame among art collectors…Edward N. Roth purchased the picture at an auction sale of the treasures of Nicholas Longworth, the great-grandfather of Congressman Longworth. At one time J. Pierpont Morgan was negotiating for the picture, which was valued at $20,000, but the death of Mr. Roth stopped the sale."
--Cincinnati Enquirer, June 21, 1917 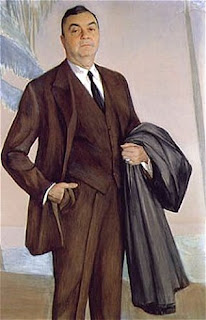 "Although John [Ringling] had long been a lover of art, he had not bought good canvasses. But now he had so much money and the prospects of it continually rolling in were so good, he decided to start a collection of the old masters of which he and Mable [his wife] had been learning more and more. While stopping at the Hotel Sinton in Cincinnati, he bought a portrait of Marie Pauline Bonaparte, one of Napoleon’s sisters, painted by the French artist Devouge. The price was in excess of $20,000.*
It was probably at Mabel’s insistence that John started buying paintings and other objets d’art on a large scale. Due to the war, many individuals and museums in Europe were in need of money and willing to sell their treasures for much less then [sic] ever before. John went on an art buying spree. But he did not seem to be the kind of man who would collect art or anything else of an aesthetic nature. Prior to this time he is supposed to have possessed several pictures of the type that formerly hung over the bars of saloons, which he showed only to his most intimate male friends."
--“John Ringling Circus Magnate and Art Patron”, Richard Thomas, 1960, Pageant Press