TV Star Missing, So Is Puppeteer 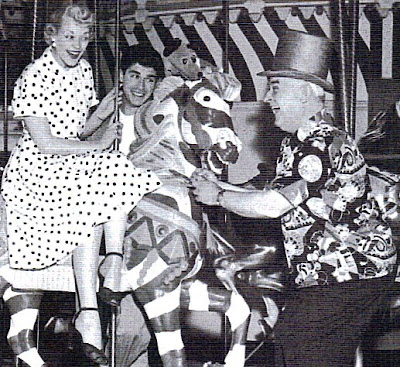 L to R: Olberding, Kelly, Yougo the puppet (atop horse head) and 'Captain Glenn' Rowell on the set of "Captain Glenn's Play Club", 1952

"Rosemary Olberding, of WLW-T and Cy Kelly, puppeteer, were absent from the station Saturday, and there were reports that the couple had eloped.
Station officials would not confirm the reports but admitted that they had been auditioning replacements for Miss Olberding. They also said Mr. Kelly was leaving the station to join another show in Cleveland."
--Cincinnati Post, January 24, 1953

Image: Cincinnati Television, Jim Friedman, 2007
Posted by Sean at 9:56 AM